A Nice Note from a Former Employer

I got a bizarre mailing a little while back from ALTA COLLEGES about my “employee benefits.” It took me a minute to figure out what the hell it was about. When you work for a for-profit, you get your checks from the larger corporation that owns that “brand” among many others, not the actual “school” you work for. I was also confused by the stuff about benefits, since you definitely don’t get those unless you chip in to a 401(k), and you certainly don’t have enough money to do that if you’re adjuncting at one of these places.

Anyway, I figured out it was a place I taught a few classes at in the first six months of 2011. Here’s what they sent me. They had all sorts of confidentiality warnings on it, since it contained “salary [sic] information specific to” me, but I don’t really care if the internet knows I pulled down a few grand at this gig. If you want to know my entire income for 2011, you’ll need a few more W-2’s, friend. 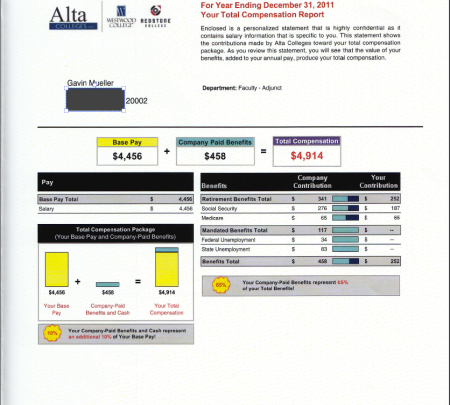 Again, I had to look at this a while, since I was pretty sure I didn’t get any benefits. My contract lasted a 9-week term, after which I could sign another one for the next term, though in reality I often didn’t get my contract until the term was half over. I could cough up for the employee health plan, but at that point I had coverage from the university I’m attending, so I didn’t bother. But I could tell that it was trying to show that I was being “compensated” by the company more than I might have realized — Total Compensation, rather than measures of take-home pay, is a favorite stat of people wanting to try to prove that workers aren’t underpaid.

Then I figured it out: the “company paid benefits” consisted of social security, Medicare, and unemployment. In other words, they are taxes that go into safety net funds that I may or may not draw upon down the road. Taxes, which the company redefined as part of my compensation. Aren’t they generous, paying these taxes as required by law, just for me! Look at that adorable yellow cloud — with these taxes, which are paid to the government, I instantly received a 10% raise! And I hadn’t realized it, simply because I hadn’t a single extra cent in my bank account! So glad these fine folks at Alta Colleges, Incorporated bothered to remind me, a long-gone temporary, with this lavish full-color mailing!

But I had another question — why mail me at all? In part, there’s a bureaucratic lag — since I was always an adjunct, not working doesn’t mean I’ve left the job, it just means I’m in the “pool.” I’m in a state of pure potential. But why mail anyone? Well, I’m no expert on the conditions of my coworkers — teaching means you spend most of your time with students, and very little time (and almost never paid) with other faculty, so I didn’t really know anyone else, and I wasn’t there very long. I did talk to one guy who taught six classes a term, and even then I wondered how he could afford to live in the area. He probably can’t, or can’t afford to live very well in the area.

So here’s his, and my, salve for our gross underpayment and exploitation. We aren’t even thrown a sop of a tiny bonus, or even some bullshit “morale-booster” like an awkward office happy hour. No, we get some propaganda from some newly minted MBAs, cruising on a fresh high of middle-management ideology, who seem thoroughly convinced that if they just present their right-wing talking points on “employee compensation” in a pretty chart, maybe their employees, struggling to house and clothe themselves, will understand how well they’re doing. An additional 10% of My Base Pay — that is fucking benevolence, right here in 21st Century America! Thanks, Alta, for paying your taxes. You’re really doing your part, really going the distance for your workers. I should write a thank-you note to your shareholders. I was such a fucking idiot for quitting because I thought I was underpaid. But that’s the narrow vision of your average employee, right, just concerned about paying rent and buying food. That’s why we’re not management material! If only I had known how well, how fully, you’d been compensating me, I might have stuck around a bit longer, keeping my gripes and my worn-out shoes to myself. As it is, I am secure in the fact that I have a couple hundred bucks coming my way if I can survive another four decades. Why, I can feel the class hatred slipping away now…

Maybe I should call these guys up. I could use the money. Er, the compensation, rather. The money fucking sucks.

This entry was posted on Wednesday, July 11th, 2012 at 5:40 pm and is filed under Capitalism. You can follow any responses to this entry through the RSS 2.0 feed. You can leave a response, or trackback from your own site.

One Response to A Nice Note from a Former Employer